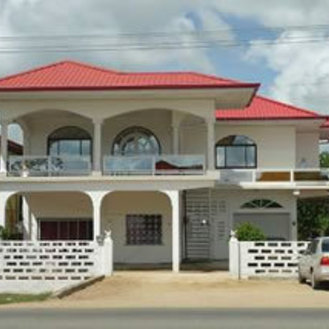 There is no time to stop the expansion of the Hermitage Hall any longer. It may be assumed that the busiest and most famous mall of Suriname, Hermitage Hall, has grown beyond its joints.

FATUM Investments NV introduced the FATUM Suriname Fund on the 7th of March, 2006. The first purchase of real estate by FATUM Investments NV was the prestigious Hermitage Mall. The mall provides a certain need in Suriname. There are plenty of opportunities for relaxation, recreation and to buy. The acquisition of the location has tasks care or continuous upgrades, which has as a result that the value of the location has increased. There are some real ambitious expansion plans ready for this mall. There are currently 60 unit holders, while the store capacity will be doubled after expansion.

"The fact that FATUM invests in the expansion of this mall shows that we have trust in the Surinamese economy, and we can assume that there is going to be a period of growth in Suriname after years of stability", says Wim Lalbiharie, director of FATUM. The Hermitage Mall will be even more of the "luxury shopping center" of Suriname in the second half of 2008. In addition to doubling the number of square meters, there will also be room for beauty & health, nursery, playground and a food court. People can also take the pleasure of "fine dining" in Heritage Mall in 2008. There is also going to be a renowned fast food chain inside the mall. Lalbiharie sees a bright future for the mall. This location will be the new heart of shopping Suriname with the arrival of the expected Multiplex theatre as a "neighbour". "We want to offer our visitors a total package in the sense that it provides a substantial part of all needs like shopping, relaxing, eating and entertainment", guarantees the FATUM director.

Another big advantage of a comprehensive luxury shopping center is the downtown relieve of the crowds and parking problems. According to Lalbiharie, the Hermitage Mall is a new standard for Suriname. "It shows that we are able to create a modern and pleasant environment. The activities that are associated with the expansion of the Hermitage Mall are taking place in a responsible way with due regard to the interests of any person involved", he says with satisfaction.