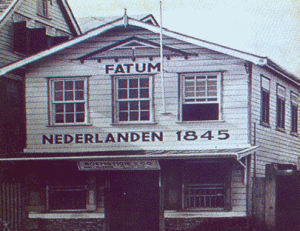 FATUM Schadeverzekering N.V. has gone through two changes of centuries and celebrated her 125th year of existence in 2007. A period in which they, as the oldest insurance company in Suriname, have developed into a stable factor and a trusted partner in the insurance events in the country.

The Surinamese company started as an agency of the Dutch insurance company, The Netherlands of 1845. Ee decided to change our name to FATUM Damage Insurance NV, a company under Surinamese law, in 1981. The further links with the former parent company, ING International BV, were not broken in the further process of judicial independence.

A steady growth in the supply of insurance products, the geographical spread and therefore the accessibility for all Surinamese residents are features of the developments of FATUM. There has also been an increase in the diversity of insurance products, by adapting these more closely to the extraordinary needs of the policyholders.

The office at Noorderkerstraat became involved and renovated in 1964 and it considerably expanded in 1985. The inflation is, for as much as possible, under control because of the policy aimed on it. There were funds invested into two new buildings in the years 2000 and 2001. These buildings are located on the Gravenstraat, near the headquarter. An own office was opened in 1982 in Nieuw Nickerie and another one was opened in 1999 at the Kwattaweg. However, the accessibility of our company involves not only the buildings at different locations in the country, but more so the agents of the company, which spread across the country to maintain direct contact with the insured.

FATUM Schadeverzekering N.V. is not only an employer and provider of economic services. We are also an investor. The products and funds are made subservient to production and services all around the country.

The company has differentiated its service vision during the transition to the third millennium. The innovations within the company concerning automation, human resources and the demand of insurance products serve the basic purpose of the company, namely insurance options to suit the particular circumstances and needs of the insured, thereby to accurately continue our services and to assist our customers through the volatile economic developments of the country, often associated with unpredictable and risky consequences for the safety and security of the customer.